HomeAbout Us Submissions Contact Us Search Article Index Edition Index
Electrical Status Epilepticus in Sleep (ESES)
and the Possibility of an Undetected Epilepsy
by Lori Fulton
By the time your child with multiple disabilities is nine years old, you have gone to a lot of doctors' appointments, and filled out a lot of medical forms.  Almost always, there is a question posed:  "Is there a history of seizures?"  I had always responded confidently (and thankfully) in the negative.  Unfortunately, this answer would soon change.
Just One Seizure
Like so many children with disabilities, my son Daniel had presented during infancy with developmental delays, hypotonia, poor feeding and growth, and gastro-esophageal reflux.  He also had several minor congenital anomalies that suggested a genetic etiology.  Exhaustive testing, including a fresh muscle biopsy at 18 months, revealed that Daniel had severe deficiencies in respiratory chain complexes I and IV, or mitochondrial disease.
As a nine-year-old, Daniel had not progressed very far beyond infancy.  He could not walk, talk, or communicate other than through simple gestures.  But seizures had never been part of the picture.  And then one afternoon, out of the blue, Daniel began convulsing with both arms and legs rhythmically contracting.  He had vomited and was making loud groaning noises as though he was struggling to breathe. Paramedics took Daniel to the ER, where doctors observed that he continued to appear lethargic and unresponsive hours after the seizure ended.  Because patients more typically return to baseline within two to three hours, Daniel was admitted overnight for additional observation and testing.
The next day, Daniel slowly became himself again.  And so I relaxed.  After all, it was just a single seizure.  The neurologist recommended that Daniel start anti-epileptic medication, but was also comfortable with our choice to wait and see if Daniel had a second seizure.   He explained that sometimes children have just one.  In addition, anti-epileptic medications could cause side effects like sleepiness or personality changes.  We were not ready to risk any change in Daniel's sweet temperament.
Subclinical Seizure Activity in Sleep
Months later, we relocated to another large city and met with a new neurologist.  Experienced with mitochondrial disease, Daniel's new neurologist approached his care proactively.  She said that while she was not especially worried about the single tonic-clonic seizure, she wanted to do an overnight EEG just to be on the safe side.
Because there seemed to be no rush, we scheduled the "rule out" overnight EEG for several months later.  If you've never assisted with gluing tiny electrodes onto an unsuspecting child's head, it can be quite an operation.  But, Daniel was a great sport and settled in nicely. Later the neurologist stopped by and reiterated her expectation that thee EEG would show nothing aberrational. 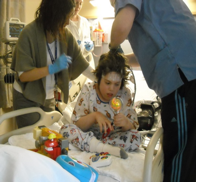 Morning came and I got my first indication that something was amiss.  Instead of the neurologist stopping by during rounds, I was invited back to her lab to review the recorded EEG with her.  What I saw on the screen meant nothing to me--just a bunch of squiggly lines.  But the neurologist told me that during 100% of the time that Daniel had been asleep, he had been having subclinical seizure activity.  He had an epileptic encephalopathy characterized by continuous spike waves, or electrical status epilepticus in sleep.
Moreover, Daniel was experiencing spike waves during 20-30% of his wakefulness.  She wasn't able to tell me when this had started, but felt it could have been going on for months if not years.  Treatment, she said, might achieve nothing.  But potentially, it could promote developmental progress, of which we had seen little in years.

Daniel was diagnosed with Electrical Status Epilepticus in Sleep (ESES), an unusual EEG pattern in children that is characterized by continuous spikes and waves mainly in the frontal region of the brain during sleep.  This condition is often seen as a part of a syndrome in which there is either sudden or insidious change of behavior over weeks or months in normal or neurologically impaired children.  These changes are due to continuous spikes in the frontal region of the brain during sleep that prevent further neurodevelopment.  Clinical onset peaks around four to seven years of age.  Seizures usually occur prior to the diagnosis, but overwhelming the clinical picture are behavioral problems and regression in cognition.  A wide spectrum of behavioral problems is seen, including ADHD, aggression, emotional lability, and psychosis.  Although the ESES typically disappears around the age of puberty, the cognitive dysfunction often persists.
ESES seems to be a rare phenomenon.  In a recent review of the medical literature, a researcher indicated that the incidence of ESES is 1% of the pediatric patients with epilepsy.1

If your child is diagnosed with this condition, learning about it will prove confusing.  One reason for this is that some experts use the terms ESES (Electrical Status Epilepticus in Sleep) and CSWS (Continuous Spike Waves During Sleep) interchangeably.  Many believe there is no difference and the terms are equivalent.2   However, others feel that ESES should be used to refer to the electrographic pattern, and CSWS should be used to refer to the clinical syndrome that consists of epilepsy, regression, and the ESES electrographic pattern.3   To make matters more complicated, the Landau-Kleffner syndrome (LKS) is often discussed in conjunction with ESES and CSWS because it, too, involves the ESES pattern seen on EEG.4

Thus, ESES is a unique paraoxysmal pattern seen on EEG during slow wave sleep in which diffuse spike and wave complexes occupy more than 85% of slow wave sleep that is present (but not exclusively so) in two epileptic encephalopathy syndromes, namely Continuous Spike Waves During Sleep and Landau-Kleffner Syndrome.5

Furthermore, ESES (non-convulsive status epilepticus in sleep) can be both idiopathic, with no known cause, or symptomatic, occurring secondary to another condition such as a metabolic disorder.  In addition, it occurs in children who have actual clinical (visible) seizures, as well as in children, like my son, who do not regularly have clinical seizures.7   With so many divergent causes, and sometimes no identifiable cause at all, it is difficult to determine the relative importance of treatment, and the type of treatment that is appropriate.

Nevertheless, the current consensus in the medical community is that ESES should be treated aggressively and as early as possible.  In a recent study of the long-term outcome of children with ESES, researchers found that only one-third had a favorable long-term outcome without permanent deterioration of cognitive level.8   The authors concluded that "[a]bolition of SES and termination of seizures are mandatory for cognitive recovery."  The authors also differentiated the outcome of those with symptomatic ESES from those with idiopathic ESES, finding symptomatic ESES to have a worse outcome.

Currently, treatment of ESES most often involves administering high doses of benzodiazepines such as clobazam, nitrazepam and diazepam (Valium).   Steroids are also used, sometimes with marked success.   Conventional anti-epileptic medications such as valproate (Depakote), levetiracetem (Keppra), or lamotrigine (Lamictal) are also used, as is the ketogenic diet, IVIG, and even surgery.9   The condition almost always goes away by puberty.  Unfortunately, the longer it persists, the greater and more permanent the cognitive and other deficits.

In Daniel's case, his neurologist opted to use a relatively mild therapy, Keppra, in part because he has an infarct in his brain's respiratory center and more aggressive therapy might be dangerous.  It has been one year since we started Keppra, and a recent overnight EEG showed improvement in his ESES.  Daniel still had spikes and waves 50-80% of sleep, but his sleep was more normalized and REM sleep had emerged.  During this last year, Daniel has finally had some developmental progress.  He began to use sign language and select preferred activities on a communication board.  He became more interactive at home and at school. 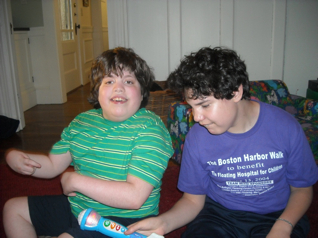 Daniel enjoying the company of a new friend, Austen, this past spring
I have found the medical profession to still be in the early stages of understanding of ESES, and the resulting lack of consensus regarding treatment was readily apparent when I joined the Yahoo group called Rare Epilepsy Syndromes.  I recommend this group for anyone wishing to learn more about ESES, CSWS, LKS and related disorders.  The parents on this list are in the trenches struggling to help their children in what appears to be young area of neurology.

ESES is thought to be a rare phenomenon that characterizes the epilepsy syndromes CSWS and LKS.  Some children, like my son, however, demonstrate ESES but no dramatic cognitive regression, behavioral symptoms, or aphasia.  Furthermore, some children demonstrate ESES but have few or no clinical seizures.   ESES therefore might go undetected for long periods, when detection and treatment might advance a child's development.  In my view, an overnight EEG is warranted even where the index of suspicion is low.

Lori Fulton resides in Boston and is mom to Daniel (age 12) and Christian (age 14).  With training in law and psychology, but none in medicine, she suggests consulting a pediatric neurologist if epilepsy is at all suspected.