I remember nearly nine years ago when our pulmonologist first told me that my son Sean needed a sleep study.  I had no clue what that would be like.  I figured that it would be a room in a hospital where they watched him sleep, and I would sit up all night making sure that he was OK.   And that none of his normal at-home equipment was touched by people who didn’t know what it was for or how it was used.   Little did I really know what we were in for, and I was pleasantly surprised, for the most part.

To begin with, they sent me a letter with a form to fill out indicating what medications he takes on a daily basis, what his sleep is like each day for a week, how he feels when he wakes, his mood, and that sort of thing.  They also included directions to the sleep lab.

Oh, my, what an experience it was when we got to the sleep lab!  Sean was only five years old at the time, and had recently had several hospitalizations.  He was not a compliant child at all.  Fortunately, I had invested in a Nintendo DS and they had a video movie player and TV, so he had some form of distraction while they worked.

One of the first things they do is place tons of electrodes on the head and body to monitor brain activity, eye movements, the heartbeat, and muscle movement.  The electrodes they use have little saucer shaped cups on the end, and in order to attach them to the scalp, face, and body, they have to use a kind of paste that reminds me of kindergarten paste.  First they clean the scalp or skin with a kind of alcohol type cleanser, and then apply the paste and the electrode with a long colored wire attached to it.  They top it off with a piece of gauze so the paste doesn’t get all over the place.  For his chest and legs they now use stickers and little snap type clips that go on and off fairly easily unless the child is tactile defensive, as Sean tends to be. 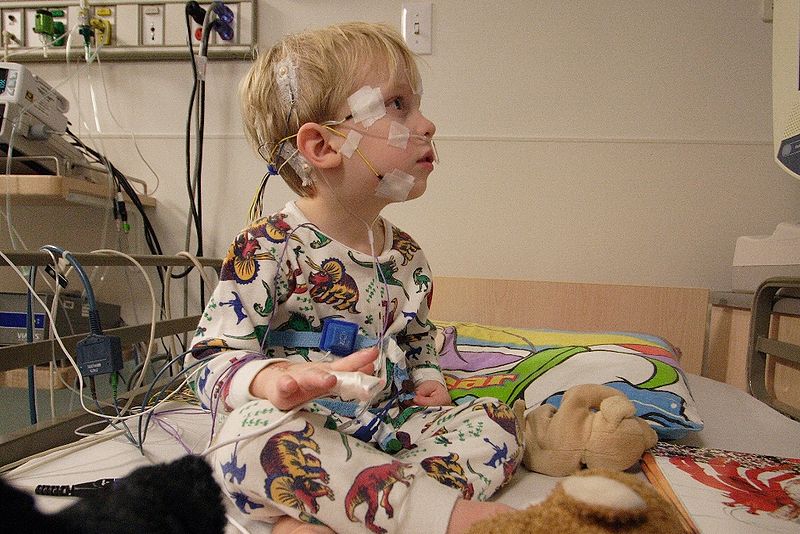 Photo courtesy of Robert Lawton
All of the wires are then tied together at the back in a loose bundle so that if the child needs to go to the bathroom at night, he can easily be gotten up and moved without lots of wires all over the place getting tangled up.  This part takes about 20-30 minutes now, though in the beginning it was easily an hour or more to work Sean through it.

They also put a couple of wide elastic straps around the chest and abdomen to measure chest and belly breathing.   Recently, they also started using a little device on the arm that they add water to in order to measure carbon dioxide, though I do not know if all centers use this.   Most centers use small airflow monitors that look much like an oxygen cannula to measure the air breathed in and out.  Depending on the child, they may or may not use a mask and BiPAP or CPAP machine as well.  For Sean’s first study he was there two nights in a row, the first night without the machine, and the second night with it.

Fortunately, they had a full sized bed for him to sleep in.  I was able to cuddle up with him until he went to sleep, so he had some comfort as well.  Most centers also have a fairly comfortable fold out bed for the parent in the same room.  They also had a bathroom just for us, though our sleep lab does lack a shower to clean up the paste afterwards.  They are in the process of building their own freestanding sleep center, and hopefully will be able to upgrade some of their equipment and bathrooms for easier clean up after the sleep study.  According to my son Sean, it is NOT fun to have to go out in the world at 6am with goo in your hair.


Tips for Surviving a Study

I have found that the best way to help Sean get through his sleep studies and other difficult medical procedures is to try to talk with him ahead of time, starting about two weeks out.  We talk it through, reminding him what will happen, and include some of the funny things that have happened before, some of the not so funny things, and how we can work together to make it OK.   He typically will choose what movies he wants to bring from home since they often don’t have the kind of movies he prefers to watch.  They also have game systems, but again, not always the games he likes to play, so we bring our own.  He has a CD he likes to listen to in order to go to sleep, so that is a must to bring, as well as his kitty, and a blanket of his own.

We also have set up a reward system for him.  Prior to the sleep study he chooses a reward of some kind.  It might be a new game for the DS or the computer or it might be a Lego set.  We typically restrict it to items about $15 or so.  If he can get through the sleep study without having a breakdown or hitting or kicking the technician, and can keep from getting upset and yelling, then he will earn the reward and we will go to the store to buy it after the study.  I never buy it ahead of time, or else I am too tempted to give in and give it to him anyway.

These days, the worst part of the sleep study for both of us is the clean up afterwards.  The paste is very hard to get out of hair, and ultimately what we have found works best is to work some shampoo on the areas of paste about 10-15 minutes before taking a shower so that it can start to soften the paste.   Even then it might take two or three times shampooing his hair before we can get most of it out, using lots of shampoo, conditioner, and combing with a fine tooth comb.  I usually try to get his hair cut quite short before we go for the study just so it is as easy as possible to get it cleaned up afterwards.  Girls with long hair are often asked to braid their hair prior to the study.

The last—and longest--part of the sleep study is the waiting for results.  It typically can take up to four to six weeks for results.  Fortunately, our sleep doc will usually call me within a week or so with the initial results, especially if there are changes.  But if she is for some reason out of town, the alternate doctor does tend to take the full amount of time to get back to me.  There are hundreds of pages of information generated from the study, and it takes a very long time for them to be able to go through all of the material to figure out what is going on with the child during the time he is sleeping. 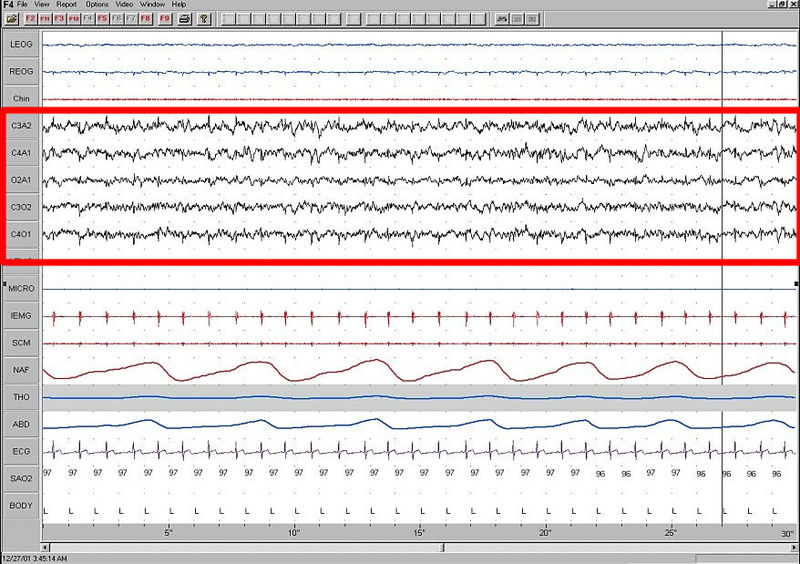 30 seconds of a sleep study
In general, a sleep report will provide the following information:
I am personally grateful for the sleep studies, and for the BiPAP machine that Sean has been on since he was five years old.  He is 14 now, and we have been told that had he not been placed on the BiPAP when was, he would have been trached and placed on a vent within six months, as his lung function was deteriorating that fast.   It is amazing the difference it has made in his life, both awake and asleep.