It started with Sesame Street.  My two and a half year old son, Lucas, and I watch Sesame Street most mornings.  Lucas has a rare chromosomal microdeletion that has caused him to have complete gastroparesis (paralysis of the stomach), among other GI disorders and developmental delays.  He has been on a feeding tube nearly his entire life. 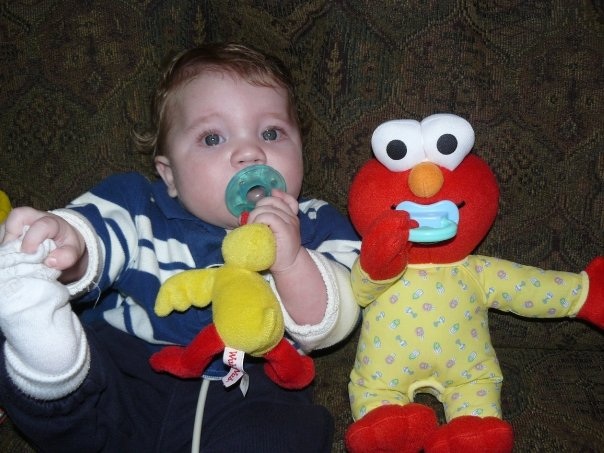 Lucas at 8 months of age with Elmo

He loves Elmo so much, he gets whole-body excited at the theme song.  I have seen a lot of Sesame Street, and have been impressed that they do incorporate children with special needs in situations where their abilities are the focus.  There was a boy who was blind who sang beautifully.  Elmo says he is sorry he is blind and the boy says, "Don't be, it is completely natural for me not to see."  I looked at Lucas.  It is completely natural for him not to eat or drink.  It has become so natural for him to be tube fed, that I don't even think of him eating and drinking differently.  That is, until we have the painful reminders when we get stared at.  There aren't many toddlers around with a backpack attached to their swings at the park with tubes hanging out.

I really want to see a child who is tube fed on Sesame Street.  I want Elmo to ask him what is in his backpack and have the child say, "It is my feeding pump.  I just eat differently because my tummy doesn't work like yours." And Elmo will say, "Oh, that is OK, we are all different!" 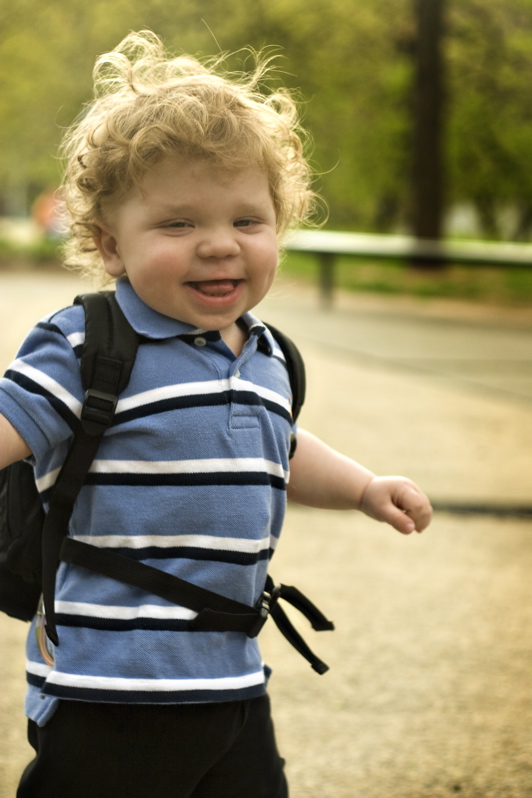 Lucas with his feeding backpack
I started a cause last summer to get a child who is tube fed on Sesame Street, and the producers turned us down.  I was shocked and hurt.  I thought it was going to be an easy fit.  All children should feel like they belong on Sesame Street.  How is not eating with your mouth that different than not hearing with your ears, or not seeing with your eyes?  Why can't a children's television program talk about being different in this way?  I took a few months to lick my wounds and figure out what to do next.

In October I had an idea.  Why not an Awareness Week?  Maybe the target needed to be adults.  If more people understood the reasons children had feeding tubes and were aware of the positives, then maybe there would be greater acceptance and social support for Tubie families.  Too many of us have had our abilities to feed our children as responsible parents called into question.  Or encountered the ill fated question, "Why can't he just eat?"  I haphazardly posted on the My Mic-Key fan page on Facebook, and they thought it was a great idea and contacted me.  I was more than surprised.  That was really the catalyst to say, "We can do this."  Tubie mommas may not have a lot of time, but they have a lot of enthusiasm.   I am self-employed.   I had the luxury of both.

We needed a way to reach people and share tube feeding knowledge.  I started building the website www.feedingtubeawareness.com.  I wanted to it to be a portal for parent information, as well as a vehicle for raising awareness.  Many Tubie mommas contributed, and have continued to share information, their experiences and bios of their children.  Reading the stories and seeing the pictures of these amazing children is more powerful than anything I can say about the benefits of tube feeding.  Then one of the mommas suggested we do a Facebook page.  It serves as a meeting place to share and connect with other parents, as well as a means to raise awareness and rally people.  Social media can be powerful tool.

We are on our way to holding our first annual Feeding Tube Awareness Week.  We chose February 6 -12 because of its proximity to Valentine's Day.  We "heart" our Tubie kids and their Tubies! 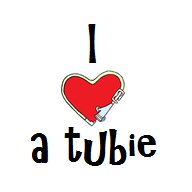 There are many goals to awareness week, with the primary one being raising awareness of tube feeding as a life-saving medical intervention.  Secondarily, we are giving liberty to parents to talk about tube feeding in ways they may not have before, to their friends, families, colleagues or people they went to high school with.  When I first joined Facebook, I didn't even mention my son was tube fed.  It wasn't until I started to meet and befriend other special needs parents and Tubie mommas that I felt comfortable talking about it in that venue.  But, by doing so, I am reaching a lot of people who never would have known anything about tube feeding.  I certainly didn't before it became our daily lives.  I am thankful when someone I knew in college asks me a question, or a former work colleague forwards a post I have made about tube feeding.

Feeding Tube Awareness Week will kick off with a video of Tubie kids and will highlight the medical reasons for tube feeding.  Throughout the week, we are encouraging parents and supporters to address misconceptions about tube feeding, show before and after photos of their children, allow others to ask questions, and to tell how a negative experience they had with others because of tube feeding could have been a positive one.  A number of parents have gotten local media coverage by telling their story.   Each of these steps raises awareness.

I still believe we can see a child who is tube fed on Sesame Street.  I still believe there will be a time when parents faced with the decision to tube feed will have enough information and support to make a good decision.  We just have to be willing to talk about it.