HomeAbout Us Submissions Contact Us Search Article Index Edition Index
Give Me Some Damn Oxygen!
by Sarah Ince

When you are the mother of a child who is medically complex, you realize quickly that insurance companies are going to be causing you a lot of work, worry and stress.  We had dealt with things with my son, who has a rare interstitial lung disease called NEHI, since he was about six months old.

In his nearly five years of life, we had to appeal decisions on a molding helmet for his misshapen head, RSV shots for him when he kept getting hospitalized with every cold he was coming down with and various billing issues.   Although annoying because they took a while to get resolved, we were confident claims were going to get paid eventually due to the plan we were on.  Getting his oxygen approved was another matter entirely.

I can't say I was shocked or surprised, but I definitely was completely irritated when my son’s oxygen was denied at the age of three.  My husband had just started a new job, we had moved to a new state, and after all, my son had been on oxygen since he was six months old.

The previous year, when we were living in Missouri so he could breathe better at sea level, we had attempted to wean him off of daytime oxygen use with disastrous results.  We had a little boy who was retracting 24 hours a day, whose heart rate was normally 180 or higher, whose shoulders went up and down with every single breath he took, which on average was about 60 a minute.  He was failing to thrive, and his stomach motility had become bad enough that he was vomiting everything he ate the whole day at dinnertime night after night.

At that point, we put his oxygen back on, and within six weeks, the retracting had stopped.  His heart rate became normal.  His stomach began working again and he gained six pounds.  He also grew hair and was able to play normally again, since he wasn't so tired all the time.  We had our answer.  This is a common occurrence with my son's diagnosis.  Their little bodies figure out eventually how to compensate for the damaged lungs, but compensation is not a better thing.  Basically there is no medication that solves my son's issues except oxygen. 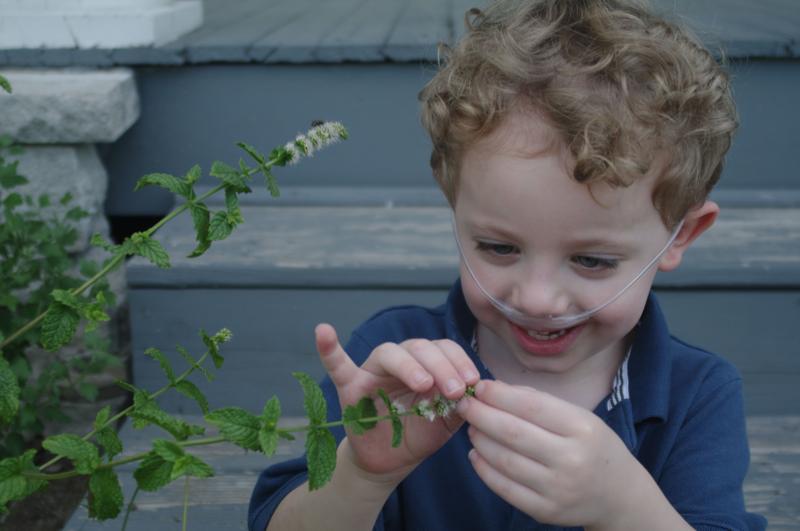 Yet there we were with an insurance company who didn't want to provide oxygen.  Why?  Because I couldn't get him to desat on command.  As stated previously, his body had learned to compensate for his lung disease by breathing hard and fast, and neglecting other vital functions like digesting and growing.  Compensation led to much worse results than just keeping the oxygen on.  I knew I could take him up on an airplane or take him back to Utah to get him to desat on command, but that was not an acceptable way to "prove" he needed it in my opinion.

You would think that a prescription from a pulmonologist would be enough.  He is the doctor.  It should be his call.  Nope.  You would think a letter from the pulmonologist explaining what his diagnosis is and why he needs the oxygen would be sufficient.  Apparently that is not enough either.

Thank goodness that my son had Medicaid coverage at the time.  Although they were supposed to be the secondary payer after the primary insurance, they were willing to pay for all of the oxygen while the insurance company played the, "let’s deny the oxygen dance.”  That oxygen costs about $1000 a month.  More than my mortgage.  More than any other bill that we have.

What was always interesting to me is that when you deal with oxygen, you realize what a pain in the butt it is.  It's not fun to drag it around.  It's heavy, the tanks are ugly, they take up a lot of room, and things like traveling, going on vacation, or even just going to the store become a huge process.  No one on earth would do it if they didn't have to.

The insurance company would insist it needed proof of him desatting on command.  Their reasoning was that my three-year-old son with a rare lung disease was just like an adult with emphysema or COPD who would only need oxygen when he desatted.  They didn't care that taking the oxygen away meant other medical issues would come up that they would be stuck paying for.  Nor did they care that my son's quality of life would suffer immensely.

I worked with the pulmonologist’s nurse to figure out how on earth to get them to pay.  We eventually resorted to sending my son's complete medical records to them, in hopes they would grasp the complexity of the situation.

I finally got to my breaking point, though.  I was sick of dealing with it, and I didn't want to make Medicaid have to continue to pay for all of it, just because the insurance company kept dodging the issue.  I am not a pushover on the phone.  In fact, I’m quite sure some of the insurance company representatives had graphic names for me when we got off of the phone.  But I eventually had to enlist my husband in the process.  And apparently he did a few conference calls using threatening words like "lawyer" and “lawsuit,” and the insurance company caved and decided to pay for the oxygen.


A Battle that May Continue...

I have come to accept that my son may need oxygen for the rest of his life.  We hope and expect that at some point, daytime oxygen will go away.  We hope that nighttime oxygen will as well.  We know from the few adults that have NEHI that fevers tend to make them struggle so much that they still need the oxygen.  It may be that my son needs it for the rest of his life, in some capacity.

But it shouldn't be up to the insurance company.  That is between his pulmonologist and us.

In closing, it is a scary time when we allow an insurance company to decide what medications we use, what services we need and if physician-prescribed treatments like oxygen are warranted.   Insurance companies do not have our best interests in mind.  In fact, quite the opposite.   We need to keep ourselves empowered and not let the insurance companies control our personal medical decisions.