One of the biggest issues facing parents of children with special needs is getting insurance companies to cover necessary equipment that makes our children’s lives a little bit easier.  I have two children with special needs, and while my insurance company has been very accommodating in covering most of their needs, the most difficult item to get covered was a special needs stroller.  The reason it was so difficult to get covered is that my boys can walk…most of the time, as long as we are not walking far.

I have three boys, and my two youngest have a diagnosis of mitochondrial myopathy.  This causes them to lack endurance required for longer outings, so we decided when my middle son was about three to look into getting a stroller through insurance. 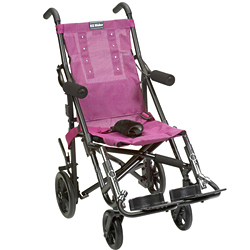 I asked our physical therapist how we would go about getting a special needs stroller, and she gave me the name and phone number of the medical equipment company she works with.  At our next appointment, the representative from the medical company came out and measured my son.  She advised me that it was extremely difficult to get a stroller covered for children who can walk.  The representative told me that I would be hearing from her after she contacted our insurance company.

After about three weeks, I received a call from the medical equipment company saying that the stroller had been denied, because our son could walk.  Even though he could not walk very far, that didn’t matter to them.  He could independently walk, and that was what mattered.  Not knowing about any type of appeal process, we searched online and were able to find a used special needs stroller for a decent price, and we used it for about two years, until our son began to outgrow it.

By the time he was outgrowing it, we were already aware that our younger son also had some special needs, and was unable to walk yet.  He was not quite two, so we began using this stroller for him.  But now we were left without a stroller for my middle son again.  Because he was a little older, his endurance was even more decreased.  We decided to try again to get the insurance company to cover a newer stroller that met his needs.

We met again with the representative from the medical company, and she advised us that we needed to get a letter from my son’s physician, who could verify that the stroller was “medically necessary.”  She also advised us to make sure that the physician did not use the word “stroller” in the letter because insurance companies do not like that terminology and will typically deny anything called a “stroller.”  The representative told us to call her when we had the letter, and that she would see what she could do for us.

I thanked her, and then contacted a specialist my children see called a physiatrist.  A physiatrist is a rehabilitation specialist, kind of like the medical doctor form of a physical therapist.  Knowing my son’s condition, she willingly agreed to write the letter.  Within three weeks of getting the letter to the medical equipment representative, we received a letter from our insurance company that stated that the “stroller” was preapproved!  We were so excited, and my son was even more excited when he realized that he would have a new stroller to ride in so that he wouldn’t have to walk so far anymore.  We decided on the type of stroller we wanted to purchase, and within about two months the stroller arrived at our home.  The entire cost of the stroller was covered.  We didn’t even have a co-pay.

The process was so much easier this time, because we had documentation stating that the stroller was necessary due to our son’s endurance issues.  If I could give any advice to somebody going through the approval process for a special needs stroller, it would be to get as much medical documentation as you can stating why your child needs the item.  Most of the time, insurance companies will not deny coverage as long as they have documentation stating the medical necessity of the item.

Here are some helpful hints to prove medical necessity:
We have recently had to go through this process again, as my youngest also outgrew the used stroller, but this time we were one step ahead, because we knew what was needed in advance.  Before I even called the medical equipment representative, I made sure to get a letter from the physiatrist, as well as another from my son’s physical therapist.  When the representative picked up the letters, I asked her what our chances were of getting a second stroller covered, and she said she was unsure because the insurance companies were becoming more stringent in what was covered.  Fortunately, within one week, we received approval for the new stroller.  This time it was ordered and delivered to our home within about three weeks.

Insurance companies can be difficult to deal with, and often will deny things that make us as parents question why.  Most of the time, however, they are willing to work towards getting us what we need as long as they can verify that it is medically necessary.


Brandi Gioia is a stay at home mom to three wonderful little boys, two of whom have a diagnosis of Mitochondrial Myopathy.  She currently resides in Kenmore, NY, and is also a college student studying to be a physical therapist.